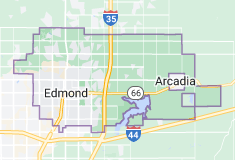 Edmond is a city in Oklahoma County, Oklahoma, United States, and a part of the Oklahoma City metropolitan area in the central part of the state. As of the 2010 census, the population was 81,405, making it the sixth largest city in the state of Oklahoma. The city borders the northern boundary of Oklahoma City.